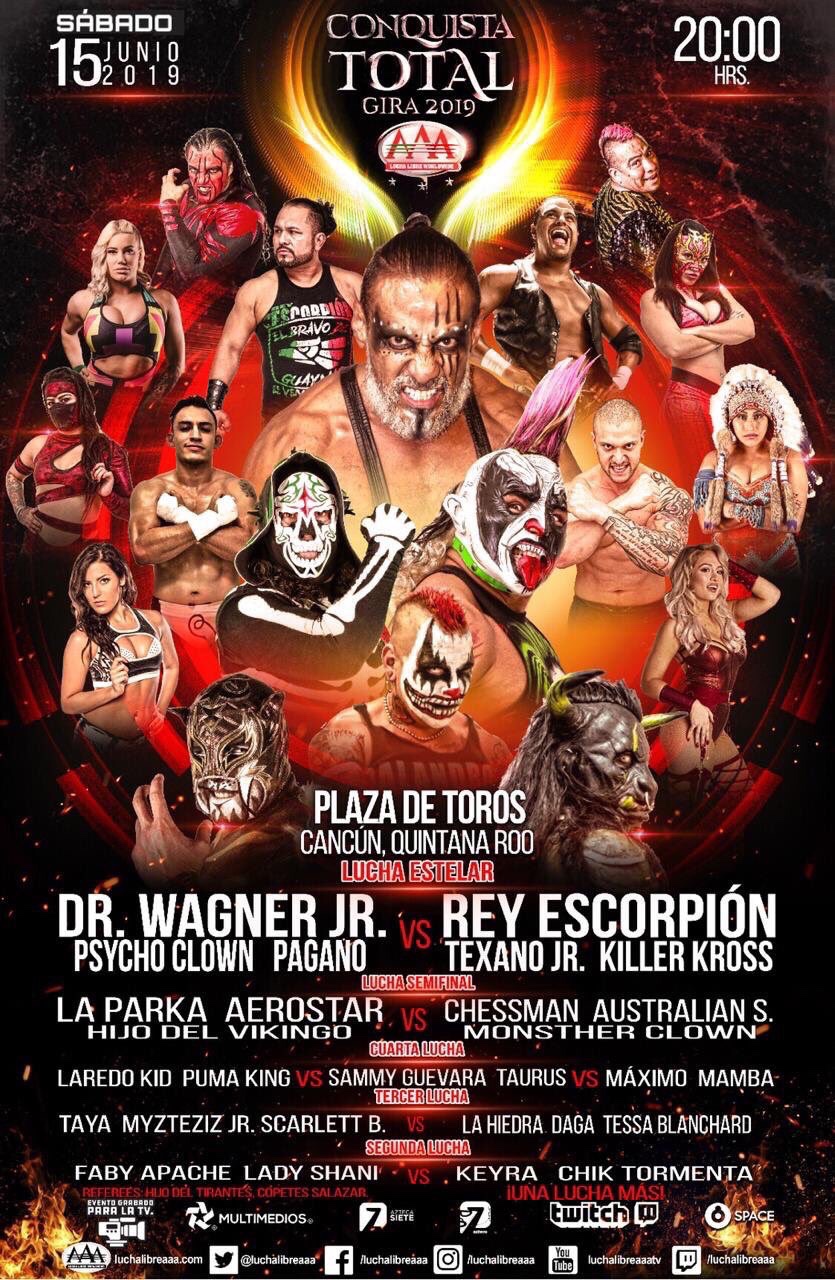 Invencible Jr. pinned Casario Jr. after a super hurricanrana. The announcers said the wrestlers were locals from Cancun. Good opener.

El Hijo Del Tirantes came out dressed in a all black.

Tirantes and Keyra vs. Maximo and Mamba

Maximo pinned Tirantes after a kiss and inside cradle. Tirantes tried to use his feet on the ropes to pin Maximo and then he argued with the referee over the count. Tirantes brought in a metal sheet during the match to use as a weapon.

Dr. Wagner Jr. came out and thanked the fans for all the love and support after the death of Silver King. He said he will dedicate his hair vs. mask match against Blue Demon Jr. at TripleMania to Silver King and Dr. Wagner Sr. He said the fans have given him strength.

Rey Escorpion came out to interrupt. He said the fans don’t care about him or his family because they all come to see Los Mercenarios. He pie faced Wagner but Wagner didn’t react.

Wagner said Escorpion will not show off and ruin his family legacy. He punched him down.

Taurus and La Heidra ran in and attacked Wagner.

Pagano made the save on Wagner. Wagner body slammed La Heidra. Escorpion backed off.

Blanchard pinned Taya after Daga ran down and super kicked Taya then allow the Buzzsaw DDT.

A fan in the front row got grabby with Scarlett after she did her top rope dive to the outside on La Heidra and Tormenta. Lady Shani came over to pull her away.

Guevara pinned Myzteziz Jr. after a shooting star press on him and King at the same time. King gave Myzteziz a powerbomb off the second rope. Guevara did about six different varieties of moonsault attempts all in a row during the match.

After the match Killer Kross came out and destroyed King and Myzteziz Jr. Guevara started to gloat with Kross, then Kross gave him a crazy look which made him run out of the ring. Kross pointed to his own head and shouted to the crowd that Guevara was smart to run away.

Daga pinned Kid after a stomp off the top rope to the back in a really good match.

Kid gave Daga a powerslam off the second rope but Tessa Blanchard ran in to stop the count.

Blanchard and Daga beat Kid up and tried to go for his mask after the match but Taya ran out and made the save. She took Blanchard and Daga down and they bailed from the ring. Fans threw garbage at the rudos while they were in the aisle and they didn’t look happy.

This was a different style of match for AAA. It was a traditional wrestling match with a few Lucha highspots mixed in. Daga worked like an old school heel toying with Kid and jawing with the crowd.

Kid gave Daga a reverse rana, and when he went for another one, Daga, turned it into a michinoku driver.

Daga gave Kid a superplex and immediately followed up with another suplex.

It looks like the steps of doom on the entranceway making it hard for people to run out if they don’t watch where they’re going.

Vikingo got the pin on Suicide after the reverse 450 Splash.

Scary moment after the match as Vikingo looked like he was hyperventilating. EMT’s came out to check on him. He was talking but holding his throat. It took him a few minutes to get up but he walked to the back with Aero Star and La Parka. He looked shaken up.

Aero Star climbed the huge fixture at ringside and did a free fall dive on Clown and Chessman during the match.

Clown grabbed a little kid out of the crowd on the way to the ring and strutted around ringside with him on his back.

The announcers basically said Bordeaux is a rudo with Kross and a tecnico in the women’s division on her own.

Wagner, Pagano, and Psycho win by DQ when Escorpion gave Pyscho a low blow and ripped off his mask. The referee saw it despite La Heidra trying to cause a distraction.

It was basically a handicap match as Bordeaux and La Heidra interfered. Puma King ran out to try to counter Killer Kross. The rudos stood tall and gloated after beating everyone down with metal sheets and trash can lids post match as the show went off the air.