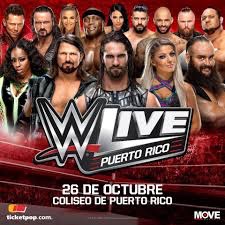 I was told that many fans were upset because Alexa Bliss, Sasha Banks, Bobby Roode, Dolph Ziggler, Dana Brooke, Naomi, and Cesaro did not make the show and a few matches advertised did not take place. The show was really short and included an intermission.

AJ Styles vs. Braun Strowman turned into a 6-man tag after a Disqualification when Luke Gallows and Karl Anderson attacked Strowman with Styles. The Viking Raiders came out to make the save.

Strowman and The Viking Raiders beat The OC when Strowman caught Styles trying to go for the Phenomenal Forearm and power slammed him for the pin.

Ricochet pinned Drew McIntyre with a roll up.

Nikki Cross and Natalia beat Sarah Logan and Tamina by double tap out submission when Natalia used the sharpshooter on Tamina and Cross used a Rings of Saturn on Logan.

King Corbin segment with Rey Misterio and DJ Luian (a music producer and musician). Typical Corbin segment where he was rude and insulting then he ended up getting beat up and bailed out of the ring.

WWE Universal Champion Seth Rollins beat The Fiend by Disqualification when the referee was attacked.