Julie Strain Passes Away at 57?

Update at 9:39pm EST: There is conflicting reports on the reported death of Julie Strain. Malibu Bay Films was apparently the source who gave the public notice of death. Several outlets, including The Hollywood Reporter, picked it up. Now MBF gave this retraction.

This was my original report before the MBF retraction:

Julie Strain has reportedly died at age 57 due to ongoing complications from dementia. She suffered a head injury in her youth while horseback riding which caused recurring health problems throughout her life.

Standing at 6 ft. 1 in tall, she stood out and was a captivating figure. She was on the cover of Penthouse Magazine a few times in the early 1990s and was named Pet of the Year in 1993.

She was a Cable TV sex symbol throughout the 1990s until the late 2000s. Her movies constantly aired on Cinemax, The Movie Channel, and HBO in the late evening hours on the weekends. Everything from action and horror to sex comedies and soft core adult films.

In the late 1990s, Playboy TV gave her and adult star Alexandra Silk their own show called “Sex Court” which was a spoof of the syndicated judge shows like Judge Judy and The People’s Court. Strain played the judge “Judge Julie” with Silk as her bailiff. They heard “cases” of people having relationship issues. The show was popular enough for its own movie in 2001 called “Sex Court: The Movie”.

With her statuesque body and look, Strain was a cosplayer really before there was a name for it. Her image and look was the templet for comics, animation, and video games.

In 2000, Strain was the animated body and voice for the character Julie in “Heavy Metal 2000” which was a direct to video sequel to the classic 1981 animated movie “Heavy Metal”. She was a perfect fit for the role https://youtu.be/HLXlHwwDN_4

I was informed a few years ago that she was really suffering and declining with her health. There were a several trips to the hospital and she was in hospice care.

She had been a regular at comic cons throughout the years, always gracious with a beaming smile for fans and those who covered the comic con and horror convention circuit. 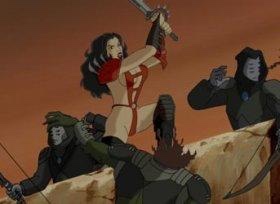