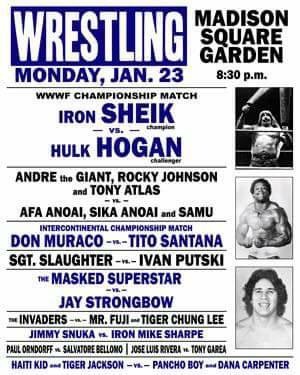 Today marks the anniversary 36th Anniversary of the big WWF event that aired on MSG Network from NYC at MSG. It was a loaded card that featured the famous WWF Title change with Hulk Hogan defeating The Iron Sheik.

Here were the result. The commentators for the matches in the provided YouTube links are Gorilla Monsoon and Pat Patterson :

Tony Garea pinned Jose Luis Rivera. Garea would later become a longtime agent for the WWF and Rivera would become half of the masked jobber tag teams The Shadows and The Conquistadors in the WWF.

The Haiti Kid and Tiger Jackson beat Pancho Boy and Dana Carpenter in a 2 out of 3 falls minis match.

Hulk Hogan pinned WWF Champion The Iron Sheik to win the title and become WWF Champion for the first time. Hulkamania won born in the WWF but Hogan had been using the term going back to his time in the AWA a couple of years before. https://youtu.be/Kq0eK0NJ-_s

Wrestling... with Demons; Mistress Of The Mat; No Prima Donna; horror; paranormal; philosopher stone; Prog Rock; Fair Play; Apocalypse in 9/8. The site is dedicated in memory of Michigan hotline host "Coach" Kurt Schneider for helping me discover the world of "insider news" and pro wrestling from around the world back in 1985 when I was a child. Special Thanks to "scream queen" Linnea Quigley and the late Art Bell. View all posts by Shannon Walsh