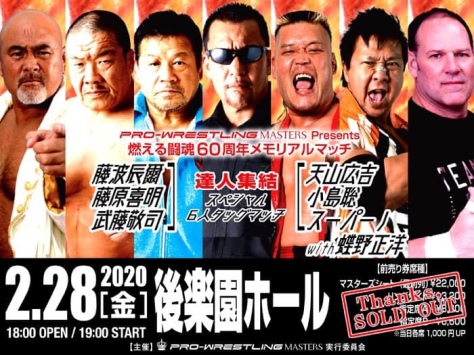 Keiji Mutoh’s “Pro Wrestling Masters VII” legends event on 2/28/20 at Korakuen Hall will not be canceled because of the Coronavirus fears. The group is telling fans to take the usual precautions of wearing a mask and washing their hands. They will offer refunds to those who choose not to attend under the circumstances.

Antonio Inoki is expected to make an appearance. This event is in celebration of his 60th Anniversary in pro wrestling. He made his debut in-ring debut September 1960 and retired as wrestler in 1998. He remained active as a promoter of pro wrestling and MMA.

Update at 4:43am EST: The group announced within the hour that Satoshi Kojima and Hiroyoshi Tenzan are off the show so the new main event will now be Tatsumi Fujinami and Yoshiaki Fujiwara vs. Keiji Muto and Super J. It sounds like New Japan Pro Wrestling pulled Kojima and Tenzan off the show. NJPW has canceled several shows of their own because of the virus.